Leaders Do The Work! - Stride Services
< Back to all

Leaders Do The Work! A couple of weeks back, I was talking to Diane, the CEO of a $3 million agency business who was lamenting to me about challenges she’s having with a member on her team. She shared that work just wasn’t getting done—and even when she talks about the work output with the individual, things still don’t seem to improve. Diane is stewing and frustrated and thinking, “I’m not sure this person is the right fit for the organization.” Does this sound familiar?

A person doesn’t do what you assume they are going to do. They should do it a certain way. You expect them to understand what you need. And when they don’t? Well, they’re not a fit! 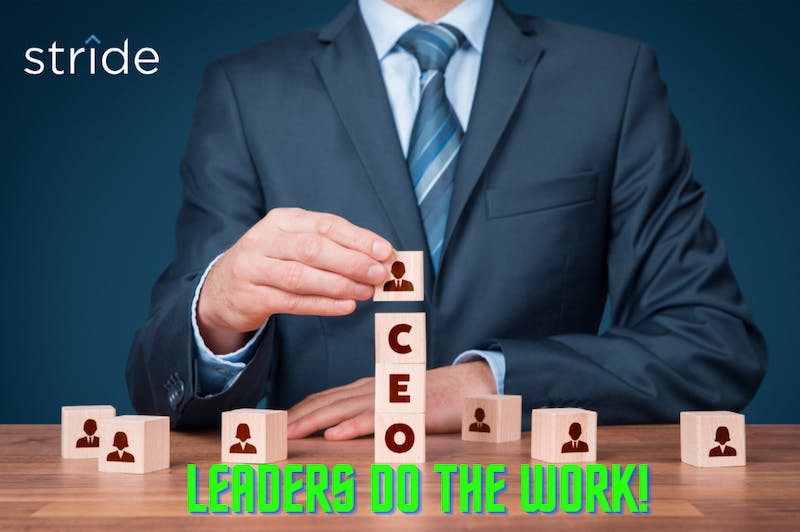 Now, I can’t ultimately say whether the employee is or is not a good fit for the organization. But what I suggested to Diane was that she do her work first. “What do you mean, do my work first?,” she asked.

“Doing the work” is assessing your role in creating this situation. A few things jumped out at me during my conversation with Diane.

First, when I hear words like “expect,” “assume,” and “should,” it’s a red flag: there isn’t a shared agreement between Diane and her employee. When you have a shared agreement (a clear goal and a plan to get there), then assumptions and shoulds don’t exist.

Second, Diane was all about the content. She found the quality and quantity of work frustrating, and explained that the work wasn’t all that complicated. She was frustrated, because it seemed to her that the work should be easy to accomplish.

Third, Diane was blaming the employee.

As challenging as these situations are (and I know they are challenging), it’s important that Diane get away from the content (e.g., the work) for a moment and drill into the context (e.g., how the relationship with this employee makes her feel).

Diane is scared and angry—that’s context. Diane hopes the employee improves so she stops feeling scared and angry. She keeps wishing that the next deliverable will put her at ease, but it never does.

I proposed three changes in focus:

So what happened? Well, Diane approached the employee and didn’t lead with the work item that was stressing her out and pissing her off. Instead, Diane said she was worried about losing a particular client. She acknowledged the lack of a clear plan for delivery timelines and quality expectations. She also acknowledged that she didn’t check in with the employee to see if there was a shared understanding.

By the end of the conversation, Diane and the employee agreed on a path toward documenting outcomes and building a plan that included timelines and owners. Diane felt better than she had in weeks.

Now, this employee still might not be a good fit! But it will be a lot easier to determine that once Diane has done her work to create an environment of transparency, responsibility, and accountability.

In April, dust off the content that is weighing you down and step into the space of doing your work as a strong leader. You’ll be glad you did.